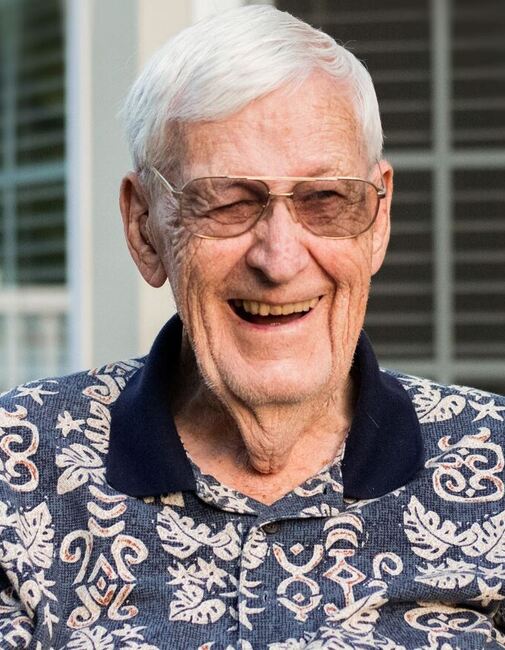 John Decker Millar, age 95, died on Monday, January 10, 2022 peacefully at home with his wife by his side.
His last words were “I love you”, spoken to his wife as he sang, “Have I told you that I love you?”
He was the son of the late Thomas Carskadon Millar and Sarah Jane (McTiernan) Millar.
Born in Cresaptown on December 27, 1926, he resided in the Cumberland area his entire life.
John graduated from the class of 1945 from Allegany High School in Cumberland.
He attended the Catherman School of Business, Potomac State College and graduated from Frostburg State College in 1951.
He continued his engineering education through extension classes at West Virginia University.
In 1953 he married Rebecca Ann Manuel of Brunswick.
He retired from a career as an engineer in the Office of Propulsion Programs at the Allegany Ballistic Laboratory (ABL).
John was extremely active as a volunteer and leader in the local community.
He served four 3-year terms as Chairman of the Bel Air Citizens Committee.
During that time, he conceived the idea for the ten-acre Bel Air Community Park, acting as project officer and soliciting funding for Open Space.
When Public Works turned down the request, he appealed to then-Governor Mandel and State Comptroller Louie Goldstein, and the park came to fruition, resulting in the construction of recreational facilities in Bel Air.
In other community roles, John was president of the Cresaptown Athletic Association and helped coach Little League teams.
He also served as president of the ABL Toastmasters Club.
He was a member of the Western Allegany Kiwanis, the US Naval Institute, the C&O Canal Association, the Allegany County Historical Society, the Allegany Arts Alliance, the National Huguenot Society, the Cresaptown Eagles, and the Cumberland Elks.
He was a member of Emmanuel Episcopal Church and a supporter of the Cumberland Area Summer Lunch Box Outreach and Heritage Days.
John devoted many years to the development and preservation of the C&O Canal.
He was a member and director of the Western Maryland Station Center and chairman of the City/County Study Team that prepared the North Branch/Cumberland Development Plan for the local C&O Canal.
He served as an Allegany County member of the C&O Canal National Historical Park Advisory Commission for seven years.
He was very proud to meet and meet Supreme Court Justice William O. Douglas, who supported the channel.
In the early 1970s, in cooperation with County Director of Tourism Jo Beynon, he conducted a local canal tour with federal, state, and county officials to promote the cleanup and development of the C&O Canal in County of Allegany.
At the request of then-Mayor Smith, it included an additional stop on Elizabeth Street, where the abundance of old tires and trash angered the advisory committee.
This resulted in the removal of debris and the dredging of several miles of canal in Cumberland, a $50,000 project.
Beginning in 1974, John became president of C&O Canal of Cumberland, Maryland Inc. and served for more than 30 years.
He handled publicity and spoke with over a hundred organizations to promote the construction of the full-scale replica of the C&O Canal ship “The Cumberland” as an official Maryland Bicentennial project.
He then coordinated the construction by the US Naval Reserve Seabees Unit RMNCB-23, along with the US Army Reserve 265th Supply Company and many other volunteers.
Following the July 1976 ship dedication ceremony at North Branch by Lock 75 on the C&O Canal, the canal ship organization held annual C&O Canal Ship Festivals there until 1998, drawing thousands of people.
The group also held various country music, bluegrass, and fiddler competitions.
In 2000, ownership of the canal ship was transferred to the Canal Place Preservation and Development Authority.
The ship was moved to Canal Place Heritage Park in Cumberland.
John served as a tour guide, assisted with maintenance, and represented the former owners in following up on the maintenance agreement signed by Canal Place.
In 2010, John helped raise funds for needed repairs.
More than 1,200 volunteer hours were spent repairing the replica canal boat and preserving it as a historic destination.
In recognition of his dedicated service, he was named “Captain of the Cumberland”.
John is preceded in death by his brothers, James, who died in France during WWII when his B-17 was shot down, William, Thomas, Gerald; and her sister, Sarah Mason.
He is survived by his wife, Rebecca, and his sister, Eileen Renwick and her husband, Thomas, of Hagerstown.
He is also survived by his children, John Manuel Millar and wife, Ann Thayer, of Freedom, Wyoming, and William Nixon Millar and Sherry Cruse, of Houston, Texas; and his grandchildren, Alexander Chase Millar and his fiancee, Chelsea Averill, Dane Brannon Millar and Douglas Rawlings Millar and his wife, Hannah, and their two daughters, Brooklyn and Madelyn.
Funeral arrangements are being made by Scarpelli Funeral Home, 108 Virginia Ave.
Church services will be held at Emmanuel Episcopal Church, Washington Street, Cumberland, at a future date in spring 2022 with a reception to follow.
His body will be cremated and he will be buried in St. Mark’s Cemetery, Petersville.
In lieu of flowers, donations in John’s name can be made to the Summer Lunch Box Outreach, 924 Bedford St., Cumberland, MD 21502, or the charity of your choice.