So far, Dallas-area restaurants with first-rate patios have mostly managed to escape the impact of the current pandemic conditions.

This week, Dallas County’s COVID-19 threat level moved to red, representing the most severe level of risk for contracting the coronavirus. The update was in response to a recent spike in cases driven by the omicron variant that has caused some Dallas-area restaurants to temporarily close due to staffing impacts. But in a spot survey, restaurant managers at the following restaurants say their patios remain open and staffed.

The county recommends that diners avoid high-risk indoor environments in favor of outdoor seating whenever possible, so some diners may turn to alfresco dining options to welcome in the new year, even when the weather it gets colder.

“Before the pandemic, we didn’t have a year-round patio – well, nothing like a pandemic to encourage alfresco dining,” said Therese Washington, general manager of the S&D Oyster Company.

At José, a Guadalajaran restaurant that is a favorite with Park Cities and Bluffview customers, general manager Victor Rojas said there are protocols, such as seating guests in smaller numbers.

“Our patio has definitely been a draw for our guests over the past year, so we’ve rearranged the seating to discourage guests from booking larger groups,” said Rojas. “So we’re safe too.” 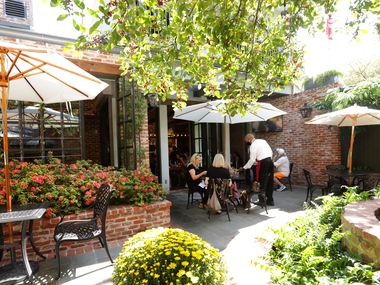 S&D Oyster Company has had a shortage of staff recently, but it had nothing to do with the pandemic. It’s a question of longtime employees retiring or moving out, Washington said. In José, Rojas said that his staff has been “very lucky and no one has gotten sick; 94% of our staff are vaccinated.”

Wild Detectives at North Oak Cliff and The Salty Donut on Davis Street have had a few minor staffing issues affecting the yard experience, but nothing significant.

“We keep pretty busy, especially with the weather, as it’s as good as it is now,” said Moriah Lemaster of Wild Detectives.

The unusually warm weather recently has only increased yard traffic. But that could change on New Year’s Day, when temperatures in Dallas-Fort Worth could drop to more seasonal norms, according to the National Weather Service. Hail and gusty winds are possible Friday night before a cold front Saturday could send freezing temperatures across North Texas.

To be prepared for the winter weather, some restaurants with large patios, such as Palmer’s Hot Chicken on Mockingbird Lane, Encina in Oak Cliff, Malai Kitchen in Uptown, and Postino in Deep Ellum, have made sure to have heaters in place.